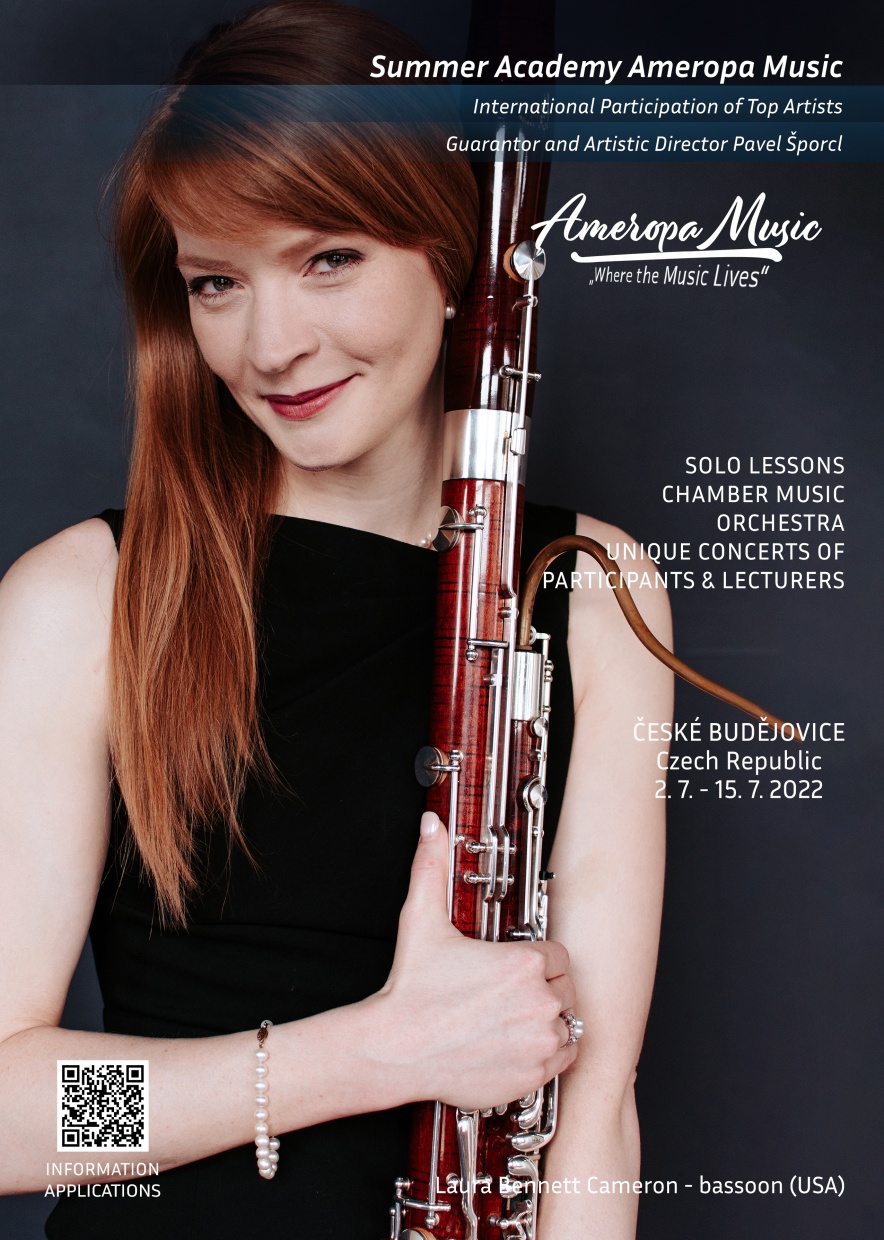 Laura Bennett Cameron’s artistic and research activities in Europe and in the United States have established an international reputation for expressive playing, innovative collaborations, and expansion of the bassoon’s repertoire and reputation through her work with international conductors and composers.

Laura Bennett Cameron serves as Assistant Professor of Bassoon and Chamber Music at the University of Texas-Arlington. She also holds the principal bassoon position of the five-time Grammy-nominated Dallas Winds, and substitutes with the Dallas Symphony Orchestra and the Fort Worth Symphony Orchestra, among others. She appears frequently as a soloist, having given recent recital and concerto performances in the United States and Europe, including a recital tour in France in fall of 2021, and multiple 2020 performances of concertos by Rossini and Weber to enthusiastic audiences in Italy, with critical acclaim from Italian media. Her most recent concerto performance in the United States was at the Meyerson Symphony Center under the baton of Jerry Junkin; she has been praised by the Dallas Morning News as a “standout [soloist]… with a creamy tone.”   She is also a sought-after chamber collaborator, and has given performances with the Fine Arts Chamber Players, Spectrum Series, The UTA Faculty Wind Quintet, and through other chamber music organizations.

Never far away from the instrument, Dr. Bennett Cameron is actively involved in research and publication. Her main research focus is the music of French composer Roger Boutry (1932-2019, Grand Prix de Rome 1954). Her pioneering research on Boutry and his compositions represents the first major published resources on the composer in any language. Further, she is actively involved in the editing and publication of Boutry’s works for bassoon through TrevCo Music Publishing and other publishing houses. She is frequently invited domestically and abroad to speak about Boutry and perform his works, thanks to her unique close relationship to the composer during his life, and her continued relationship with his family.

Her debut recording, “French Masterworks for Bassoon and Piano,” (Indesens Classique, 2016)  recorded with composer Roger Boutry at the piano, has been praised as “virtuosic, lyrical, and engagingly musical” by critics across the globe. Her second CD with Roger Boutry, “Encounters,” is expected out in late 2022, and was recorded with Gina Ford (Dallas Opera principal oboe), Johanna Cox Pennington (Louisiana State University), the late Eric Varner, pianist Darío Llanos Javierre, and fellow Boutry scholar and pianist Mathilde Handelsman (University of New Hampshire). This thrilling album brings Boutry’s works for double reeds and piano into the spotlight, including his final work for bassoon.

Dr. Bennett Cameron holds a Doctor of Music in Bassoon from the Indiana University Jacobs School of Music, with concentrations in Music Theory and Early Music.  She holds a Master of Music degree from the New England Conservatory of Music, and a Bachelor of Music from West Texas A&M University (all degrees earned with highest honors).  Her principal teachers were William Ludwig, Richard Svoboda, Dr. Tina Carpenter, and Michael McCraw.  In addition to an active solo recital schedule and regular chamber performances, she maintains a small private bassoon studio in the Dallas-Fort Worth area.  She is a member of the Pi Kappa Lambda Music Honor Society, the International Double Reed Society, Society for Music Theory, and the Texas Music Educators Association.