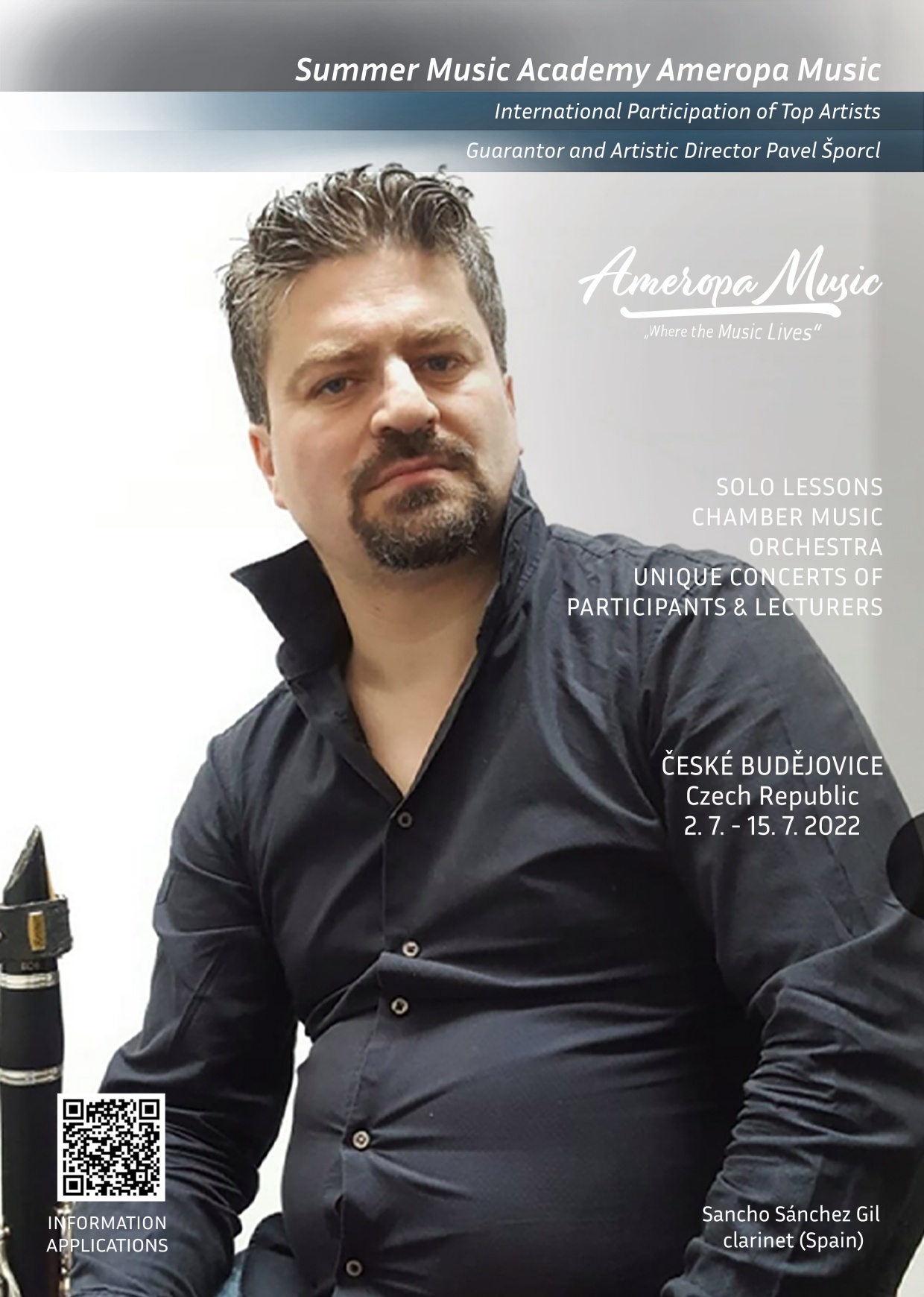 Sancho Sánchez is one of the most complete and brilliant Spanish clarinetists today.

ACADEMIC TRAINING: He obtained the title of Superior Professor of Clarinet at the Real Conservatorio Superior de Música de Madrid, where he obtained brilliant marks from beginning to end of the degree with the professor and soloist of the ONE José Vicente Peñarrocha Agustí in 1992. He expanded his training by receiving classes of the Spanish: Antonio Goig, Miguel Espejo, Ramón Barona, José Antonio Tomás Pérez, Vicente Alberola, Joan Enric Lluna, José Luís Estellés, Justo Sanz, Enrique Pérez. He continues his training with Antony Pay, Michel Arrignon, Jean Louis Sajot, Guy Deplus, Yehuda Yilad, Silvie Hue, Andrew Marriner, Angela Malsbury, Hedwig Swimberghe and especially with Walter Boeykens, of whom he becomes his assistant professor. All this extensive training allows him to have a global perspective of the different schools in the world.

At the age of 17, he won the position of Principal Clarinet to the Young Orchestra of the Community of Madrid, being a founding member. For 5 years, he delved into orchestral practice, performing in prestigious international concert halls such as the Monumental Theater, the National Auditorium, the Berlin Philharmonie, etc … In 1992 he received a scholarship together with the Young Wind Quintet of the Community of Madrid to carry out the European Chamber Music Course Stage 92 where he received classes from the English Wind Quintet “Albion”. In 1996 he was selected Reserve clarinet of the Young Orchestra of the European Union and in 1997 he made the final auditions to the World Orchestra of Musical Youths. PROFESSIONAL EXPERIENCE: Artistic experience: At the age of 16, he won his first place as Principal Clarinet of the Professional Band of the Madrid Amusement Park.He has more than 20 years of orchestral experience, where he has been able to collaborate with national opera and zarzuela companies and with the following orchestras: Spain Philharmonic Orchestra, Madrid International Orchestra, Municipal Symphonic Band Madrid, European Orchestra, Mediterranean Symphony Orchestra, Philharmonic Orchestra of Valencia, National Orchestra of the Romanian Opera, Symphony Orchestra of Europe, Philharmonic Orchestra from Cluj, etc … delving into a range of repertoire of all kinds, such as the repertoire for Banda, Symphonic, Zarzuela, Opera and soloist.

Pedagogical experience: In 1994 he obtained a teaching position at the Open Classroom of the Community of Madrid. In 2003 he joined the Body of Teachers of Music and Performing Arts of the Community of Madrid, being a professor at the Victoria de los Ángeles, Amaniel, Alcalá de Henares, Getafe, Arturo Soria, Majadahonda, Teresa Berganza, Moreno Torroba, Salamanca and Ávila. On 2012 wins the Competition to occupy a Chair of Clarinet at the Superior Conservatory of the Principality of Asturias, remaining two years in this position. He has taught courses at the University Polytechnic of Madrid and in different centers of Spain. OTHER MERITS: in 2005 he was awarded the Finalist diploma in the International Competition of Clarinet ¨Villa de Montroy ”.

As a soloist, the performance of Óscar Navarro’s concert in the National Auditorium together with the Joaquín Turina Symphonic Band, from Madrid. Since 2003 he is a guest at the National and International Clarinet Congresses that are held every two years in Madrid. Ha made final auditions to the Paris Opera, Chicago Symphony, and the New York Met Orchestra. He is a member of the jury in the International Interpretation Competition “International Fest Contest”. On 2017 represented Spain at the & quot; First Yamaha Clarinet Forum & quot; held in Hamburg. The prestigious Spanish composer Zulema de la Cruz will dedicate her third concert for clarinet and orchestra to him. Sancho is a Yamaha-Spain Artist and plays with a CSG III model.