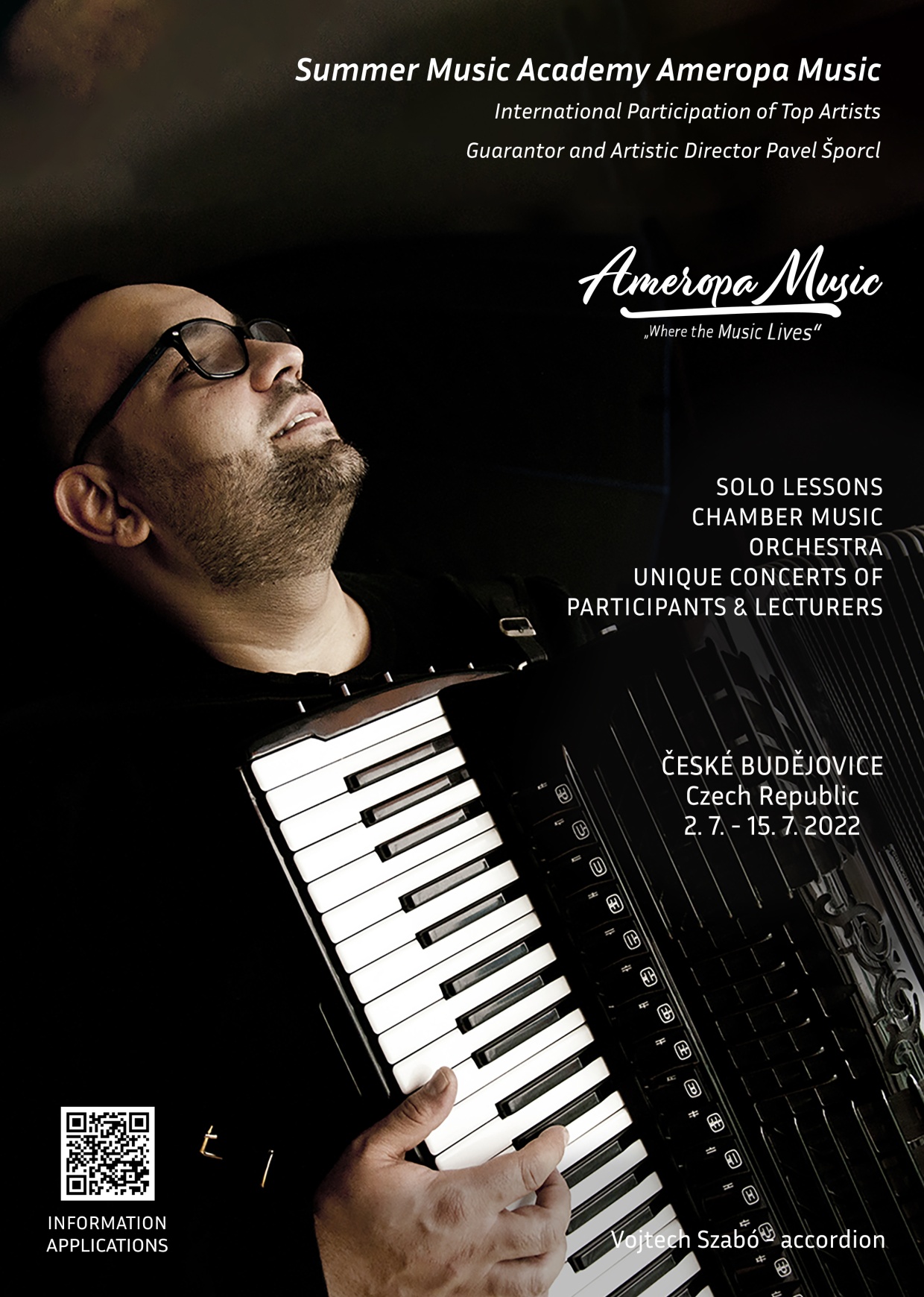 Vojtech Szabó was born in Nové Zámky, Slovakia. He is considered one of the best accordionists in the Czech Republic and abroad. He resents the unpretentious virtuosity that tends to be inherent in people touching non-classical musical genres (Petr Veber: music critic). He is fully engaged in concert, pedagogical and compositional activities.

He graduated from the Conservatory in Bratislava in the class Mgr. Art Nada Varínská. While studying classical play, he also devoted himself to jazz and Argentine accordion play. He performed alongside Slovak jazz leaders such as Peter Lipa, Jozef Brisuda, Andrej Šebo and others.

After his studies in 2009 he moved to the Czech Republic, where he got an engagement in the Gitans Blancs group. It later changed its name to Vojtech Szabó & Gitans Blancs, Vojtech performed as the main soloist. With this band, playing jazz manouche Django Reinhardt, Vojtech worked until 2013.

Since 2009 he has also worked at the Zlín Elementary Art School as an accordion teacher. His pupils regularly place themselves at the top of competitions at home and abroad. He also likes to engage his pupils at his own concerts. As an educator, he also organizes educational concerts for primary and secondary schools Accordion in a different way – as you know him (not), where he tries to present the accordion as a full-fledged jazz and classical musical instrument in the form of improvisation and interpretation of various musical genres of the world (flamenco, swing, tango, foxtrot, etc.).

In 2010 he founded the trio Tango Argentino, with whom he performed alongside the world champions in the dance of Argentine tango Peter and Gábina Nečas. In autumn 2012 he became a solo opening act and guest of the band Prague Výběr, with whom he performs in sports halls.

In 2014 he built a project with the Bohuslav Martinů Philharmonic Orchestra: Michael Kocáb and Vojtech Szabó. The project includes two large concert works by Astor Piazzolli (Aconcaqua and Concierto de Nàcar), which are complemented by the nečas’s dance component. In addition to Michael Kocáb and his chansons, the project also features Hungarian jazz and soul star Takács Nikolas.

In 2014 he recorded the CD Gipsy Fire as a special guest of Pavel Šporcl and the Gipsy Way Ensemble, with whom he performed at Šporcl’s GIPSY FIRE GENERALI TOUR 2014 throughout the Czech Republic. In 2016, he opened the Kocianovo Ústí festival with his solo concert. In the summer of 2016 he made the big film The Adventurers (starring Jean Reno), where he played the role of accordionist.

Vojtech’s role model is the French accordionist Richard Galliano, who performed with him on the occasion of his Bratislava concert in late 2016. In 2018, emp music released its debut album Vojtech Szabó: Play Accordion.

In September 2018 he was a guest of the Django sur Lennon festival in Ireland, where he played with the world’s top jazz musicians such as Stochello Rosenberg, Tchavollo Schmitt, Samuel Farthing and Costel Nitescu. This festival was a great success for Vojtech, who was described by critics as a phenomenal accordionist. In the summer of 2019 he successfully represented the Czech Republic in Moscow as part of the Czech Music Festival.

In 2019 he founded the Vojtech Szabó Jazz Band, which plays his own work, jazz music and music by Django Reinhardt.

In 2020 he continued successfully both in solo play and as a guest of Pavel Šporcl at his Gipsy Fire concerts with his gypsy dulcimer band, as a guest he also performed at one of three exceptional Concerts on the Surface of the Pond Jureček and at a concert organized for the birthday of Bára Šporclová Kodetová. He also continued educational concerts for schools.

At the end of 2020 he is releasing a CD with his Jazz Band, on which his own compositions are recorded, or the most famous jazz standards (e.g. Dizzy Gillespie: Night in Tunisia).